​​This past summer, Brandon and I toured the Midwest visiting farmers to launch the Perennial Fund. We saw the countryside, met tremendous people and the adventure sparked a lot of great ideas. We had lots of time in the truck to discuss learnings and generate new business models. It’s all about creating impact. Of all of the ideas we stumbled upon, there is ONE idea that will change the world.

Our ONE idea was born out of a growing frustration that almost the entire Midwest is planted to corn and beans. It’s outrageous that we grow two kinds of plants on the plains. It’s taken lots of time to till and turn the plains to grains. Then, we thought, “Why grow two things when you could grow one thing?” I mean come on. Diversity is so complicated. ‘Simplify the system’ has become our mantra. Living with nature is too complex and asking, ‘What does the land want to be?’ too ridiculous. Just like the beauty and domestic pleasure of the American lawn, the largest crop in the U.S., corn and bean fields should be clean and weed free, uniform and dominated by a single species.

Here at Mad Ag, this is why we’ve shifted all resources to the development of the CornBean™. CornBean™ is both corn and bean. The CornBean™ grows corn cobs high on the plant and beans low on the plant. It’s intercropping on a single stalk. Researchers are saying, “It’s simply gorgeous to look at 5 million years of evolution and now have the opportunity to improve it.” Lead scientists of Conquest Innovations, INC., which just closed a $1.5B friends and family round and represents an important JV partner in our SPV, ‘Bad Agriculture’, look forward to what they say is, ‘a new kind of stewardship’.

31 days ago, we mapped the genome. The genome certainly looks a lot more colorful and much bigger than the genomes of other plants. Its a great genome. In short, the genes average 4kb with 7 exons, with a density of 1-14 genes over 120 kb, without significant clusters. Polyploidism and macro-collinearity were really good, as well as the conservation of genes and the arrangement, largely because of the obvious lack of insertions, deletions, inversions or translocations. The figure below depicts the kaleidoscope of economic and biological potentiality. Basically, the genome is fully flexible for human manipulation. We’ve sent pictures to Nature and Science, and lithographs to the Louvre.

With CRISPR, we can edit the genome to produce #2 yellow dent corn, as well as a range of heritage and ancient corn varieties, such as Bloody Butcher. With technology, anything is possible. Aaron Hirsh, a visionary here in Boulder, CO., is curious what adding a few genes that code for porcupine quills could do for pest production. We are curious too. Living with the land has never been easier and more profitable.

The best part about CornBean™ is that it’s delicious. Our team recently cooked up a pot of CornBean™ in a cassoulet, which we paired with duck confit and a bottle of 2001 Château Mouton Rothschild, which we should have watered the cactus with: too many sulfites. We’re making great progress on commercialization. We’ve already trademarked the name. We bought both domains, cornbean.org and cornbean.com.

Our market strategy is to release an affordable can of succotash. The brand aesthetic harkens to white domination of American farmland. Boulder, CO. is the perfect place to launch a CPG brand. If COVID hadn’t struck, we’d be at EXPO West. Cows, chickens and pigs love the CornBean™ diet. The CornBean™ is unusually high in lysine and methionine, which makes animals grow incredibly fast. One diet for all. It’s fit for cows and the bourgeoisie.

By next year, we’ll be ready to erode commodity and local markets. The market price of CornBean™ is unhinged from the pricing factors that affect corn or beans, such as the ethanol market, crude oil prices, Chinese demand, the US Dollar, and climate, and we don’t have to fret over the disequilibrium imparted by Trump’s tariffs or the whimsy of important trading venues, like the Chicago Board of Trade, the Bolsa de Mercadorias & Futuros, the Marche a Terme International de France, the Budapest Commodity Exchange, the Kanmon Commodity Exchange, or the Tokyo Grain Exchange. These institutions mean virtually nothing to the CornBean™ and our expected profits. We’re very excited to wield such financial power for good. Monopoly and non-displaceable value is the key to crushing the competition, scaling and creating impact. The J-curve on our projected revenues is a really strong J-curve. A J-curve for humanity and the Earth.

The environmental benefits of CornBean™ are tremendous. With the CornBean™, we’ll no longer need to harvest wild fish for fishmeal production. The CornBean™ also thrives with glyphosate, so no need for tillage. Yesterday, we bought Monsanto back from Bayer. Easy transaction. The CornBean™ is both crop and cover crop; it knows to plant a cover crop of more CornBean™. The root system is very shallow because we’ve genetically engineered that 90% of the net primary production toward aboveground biomass. This isn’t a problem because we slather the seeds with Indigo Ag’s proprietary seed inoculum, which turbo charges the soil microbial community to lives symbiotically with the roots, enabling tremendous drawdown at > 10 tons of carbon per acre and significant nitrogen fixation (200 lbs/acre), effecting nullifying the need for fertilizer. The CornBean™ also thrives hydroponically and with artificial sunlight, better than Colorado cannabis. It’s amazing to have a plant that doesn’t require soil to grow. Imagine skyscrapers of CornBean™, allowing us to restore the once magnificent prairie.

The CornBean™ will solve climate change singlehandedly by enabling the rebuilding of soil and the rewilding of nature. The outstanding yields, which we have to measure in Hobbits, not bushels, will spare a tremendous amount of land. Watch out, palm oil. We can triple-crop the CornBean™ in tropical climes. We hope to simplify the Amazon soon. We look forward to reinvesting profits into helping rural communities transition to CornBean™, forsaking subsistence agro-ecological agriculture to access the resilience that global commodity markets offer. Ted Nordhaus, a visionary from the Bay Area, says, ‘The CornBean™ is nuclear for agriculture.’ We agree.

Most importantly, the CornBean™ is exciting for farmers. Traditional farming just requires too much time on the ground, and chemical agriculture requires too much time in the combine. With the CornBean™, farmers won’t have to walk outside anymore, or hop in a combine. We’ve partnered with Netflix to provide free subscriptions to any CornBean™ grower, so they can effectively matriculate into modern American society and keep a pulse on what really matters, like watching Schitt’s Creek. For the American farmer, the CornBean™ holds the promise of profits, power and freedom.


*Disclaimer. This is satire 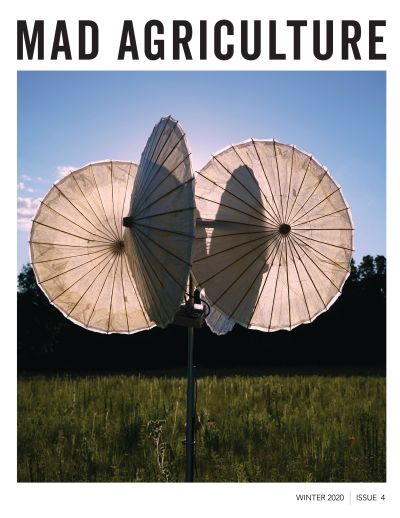