I will begin with a glimpse into our theory of change. We believe that the power to transform the world lies within the underdeveloped capacity, virtue and unrealized potential of every person.

The idea of changing an entire system is daunting. The good news is that it only takes a few individuals to begin turning the tides toward change. Erica Chenoweth, a thought leader on the success and failure of building non-violence movements, has found that non-violent revolutions become inevitable when 3.5% of the community changes.

While Chenoweth’s analysis looked at political revolutions, we expect that the 3.5% rule applies to the regenerative agriculture movement too. A movement that shares many of the same conditions that give rise to successful non-violent revolutions — moral high-ground and unexpected allies to name a few.

Chenoweth’s insights align with another concept: the Diffusion of Innovation, which explains how, why, and at what rate something new spreads. This concept proposes that the adoption of a new idea, behavior, or product does not happen simultaneously in a social system; rather, it is a process whereby some people are more apt to adopt the innovation than others.

Mad Agriculture works with innovators and early adopters: stewards that are willing to take on risk, work at the margins, push the needle, and have a high degree of and pride in leadership. While it’s tempting to want to help all sorts of farmers, we resist that urge. We waste no time on convincing farmers to change. Rather, we work with farmers that share the same vision as Mad Ag. Our strategy is to find, support, empower, uplift and do everything we can to help these farmers.

Our way of working focuses on building new systems, rather than reforming the current one: new financing, new markets, new tools and techniques, and more. Of course, much of the new is rooted in the old. The future is as much about looking back as it is looking forward — a new and ancient story.

We must all do our best to hospice the old, while giving birth to the new. It’s important to fight the system, not the people. 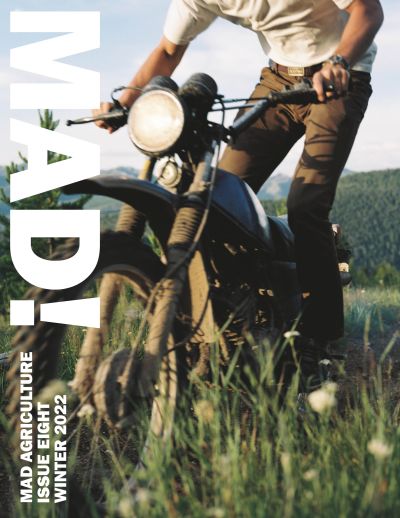