I often dream in the field—I dream of a multi-layered orchard system with vines and root crops and berry bushes and over-story nitrogen fixers and squashes crawling along the ground. I dream of chickens and ducks eating snails and tilling soil and adding fertilizer for the next crop. I dream of plump fruit year-round, colors and bugs and birds whizzing by, excited by what has been found. I dream of inches and inches of dark, rich topsoil beckoning death so it can give life. But why do I spend time dreaming? Because I’ve seen it, I’ve worked it, and it’s beautiful. It gives the labor force a diversity of tasks to keep the mind and body sharp and fulfilled. It allows for year-round production, giving the farmer diversified sources of income. It lessens, if not completely nulls the reliance on synthetic fertilizers and pesticides. And most of all it feeds the community an abundance of organic, ripe, nutritious food that isn’t contributing to climate change but in fact, reversing it. Carbon sinking, trees rising.

To tell the truth, carbon is usually the last thing on my mind—the connection to a healthy gut and immune system, that is what tantalizes my mind. It’s tasting the unfathomable depths of flavor in an apricot never even fathomed to be held true that keeps me dreaming. I know it’s possible because it happened to me. But on a different farm, in another place in time.

Now, I dream at my family’s avocado farm in southern California. My current reality comes in monocultures, synthetic fertilizers, herbicides, and pesticides. It comes in a contracted labor force to pick 50ft tall avocados for 14 hours a day. It comes in high water bills, and low returns on wholesale markets. It comes in the question: “How does a small family farm compete with big ag?”.

But things can change fast. For me, all it took was the help of cover crops and a scythe. When the rains come, you better be ready. And we were. We had 400 pounds of cover crops in five gallon buckets with a workforce made up of five family members, and two dogs. We flung seeds onto the land with our hands as the clouds grew dense above. Clovers, sweet alyssum, CA poppy, native fescue grass and wildflowers—over 15 species in all. The next day the rains came fast and cold… sweet music to my ears. Three inches. But then that was pretty much it. One more inch that year—and in a 17-inch average rainfall region, we got four. 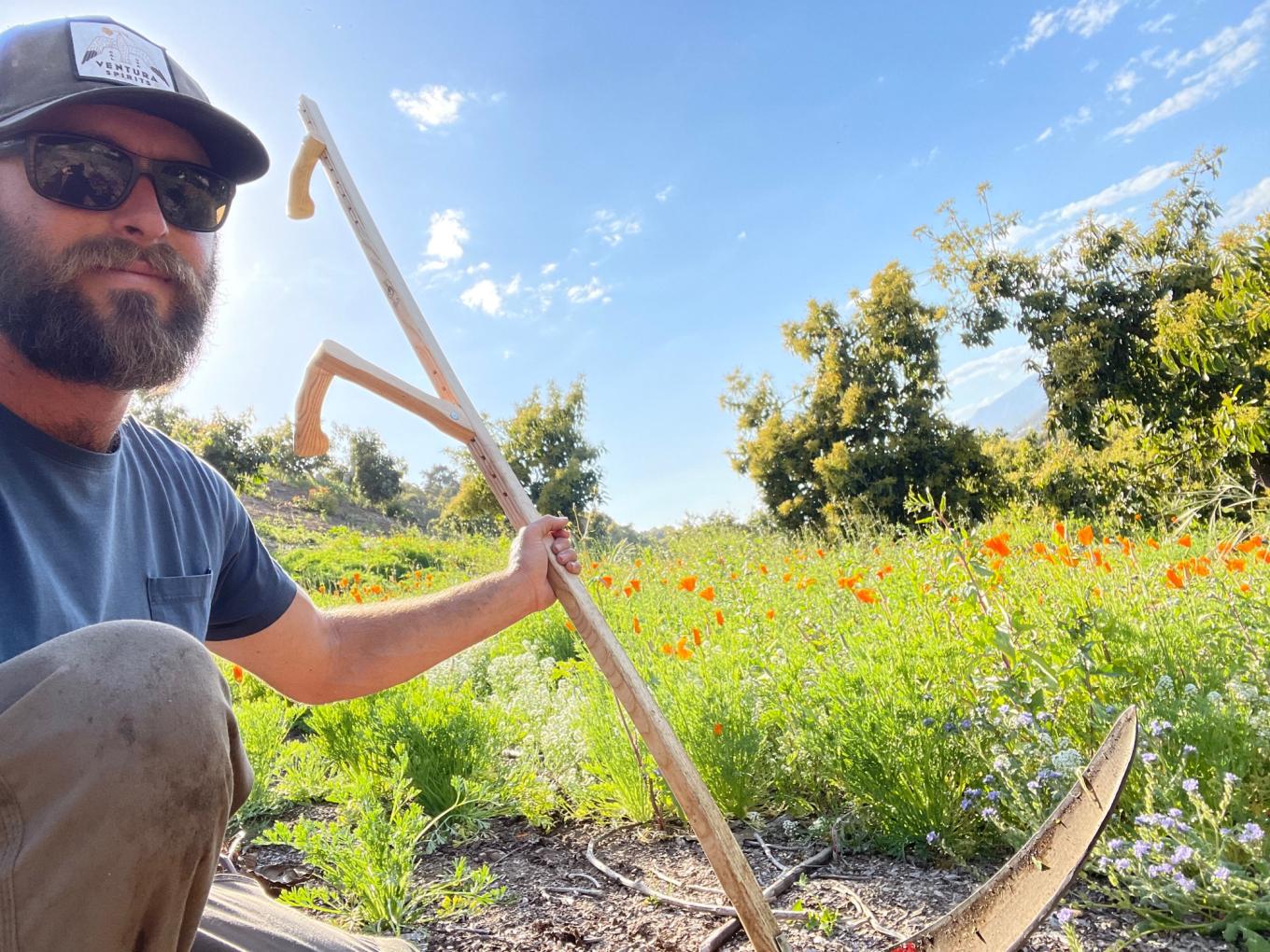 Even so. But, the seeds sprouted, one by one. Over the next four months, patience was required as the eyes discerned between what was a weed and what was a cover crop—and even though that is sometimes a philosophical question, this time, with money on the line, it was a very real one. But the results we’re promising, and the cover-crops sprouted with great success. And then we waited for the flowers, the brilliant flowers! Clarkias, phacelia, California poppy, blue bells, sweet alyssum, clover, lupine… oh what a show they put on. The bugs agreed.

As romantic as it was, work was still to be done. One thing about avocado roots you must know: they’re shallow. They dance where the mulch meets the topsoil. And sprinklers need to do their job, undoubtedly. Whether a cover-crop or weed, we can’t let them block the sprinkler nor outcompete the avocado roots (which is a nuanced determination, because some competition is good, right?). So, with the help of an old-fashioned scythe (like the one the Grim Reaper has), I went to work clearing plants from sprinkler areas. The slopes were difficult, but a little bit of work each day, and the 10 acres of cover crop weren’t too much to manage at all. No reason to touch the cover crop in the aisles of avos—let the soil be covered. By the time summer came, and the majority of cover-crop went to seed and looked a little too gangly for some eyes, a team of weed-whackers (Javier, Francisco and Rodrigo) were put to the job and boom, two days in and the cover crop was down on the ground, ready to be turned into organic matter, and seeds ready to germ.

What came next actually surprised me in some ways, maybe because I planned for failure, as one does in farming with all the variables seeming to work against you. But what came back after the weed-whacking and scything was the California poppy, sweet alyssum, clover, native grass and yarrow! Due to the rhizomatous nature, the cut-back was a blessing. The favored cover-crops started out-competing the tall and aggressive weeds. The sweet-alyssum and yarrow brought beneficial insects; the California poppies beckoned bees, and the clover fixed nitrogen.

And the grass? Well, it might have brought another advantage I wasn’t aware of until recently. Some say gophers co-evolved with native grasses because a mature native grass can provide a food source for gophers year-round without dying, due to its deep thick roots. Theory, yes, but either way I’m getting deep roots—or in other words, little columns in the soil for water to travel down and replenish the aquifer. Non-spreading, beautiful native grass—yeah, I’ll take it.

Now, I’m ready for round two of cover-cropping on the family land, and this time I’m a little more prepared. I’ve got a new plan. I’m going to add dill and cilantro to the mix. They harbor the lacewing larvae which is a voracious eater of thrip, our main avocado pest. Then in the sprinkler areas, we’ll throw out buckwheat (designed to outcompete weeds and stays low) and sweet alyssum (stays low and self-seeding), thereby reducing scything and weed-whacking time. I’m sure I’ll learn something more next year, and the year after.

Until then, I keep the scythe sharp, and do a little dreamin’. The scythe is quiet, and I can hear the pollinators. No need to add gas, just sweat. I lay down thick mats of plant matter for the avocados, a quick act of service designed to keep the tree healthy, and in turn, the family farm profitable.

With every cut of clover, I can be assured nitrogen is released into the ground, and the plant will respond by spreading. I can feel the mycelium dance beneath my boots. Not compacting but spreading. Exchanging, networking, those little white strands are the glue to a fabric so intelligent it makes me feel small. I can think when I scythe, but most importantly I can imagine the possibilities for this land. Hachiya Persimmons are next, hoshigaki style. Hmm, I think I can interplant over there—I see sun, I see space, I see potential for more.

Dreaming of the future is important and knowing what’s possible is empowering. Change moves slowly, the way I like it. No multi-story agroforestry system just yet, but I’m on my way, just ask the bumblebees.