The Grain Revival Guide is an evolving, holistic, and comprehensive collection of resources on the Front Range grain revival movement.

Are you a grain grower or interested in becoming one? Learn more about ancient and heritage grain production in the Front Range and see data from the 2021 grain trials here.

Ancient and heritage grains are tasty and in demand. As a brand or small business-owner, find out how to buy these grains for your products and why they are important for your customers.

Grains are the edible seeds that come from a specific family of grasses. Wheat, oats and rice are the most commonly eaten grains around the world, but rye, barley, corn, millet and sorghum are also popular staples across cultures and diets.

Grains are divided into two categories based on how the grain kernel is processed: whole grains and refined grains. A whole grain is one where the kernel was left fully intact during processing, so all of the beneficial nutrients in the grain are available in the final food product. Examples of whole grains include whole-wheat flour and brown rice. A refined grain is one that has been processed to remove the bran and germ, giving food a longer shelf life but removing most of the beneficial nutrients. White bread and white rice are examples of refined grains.

Grains have been a keystone of the human diet for thousands of years, and they have played a critical role in shaping cultures and civilizations. Today, more than 50% of the global daily caloric intake is derived from grain consumption. They can be an important part of a healthy lifestyle, containing complex carbohydrates, fiber, oils, and essential vitamins and minerals. 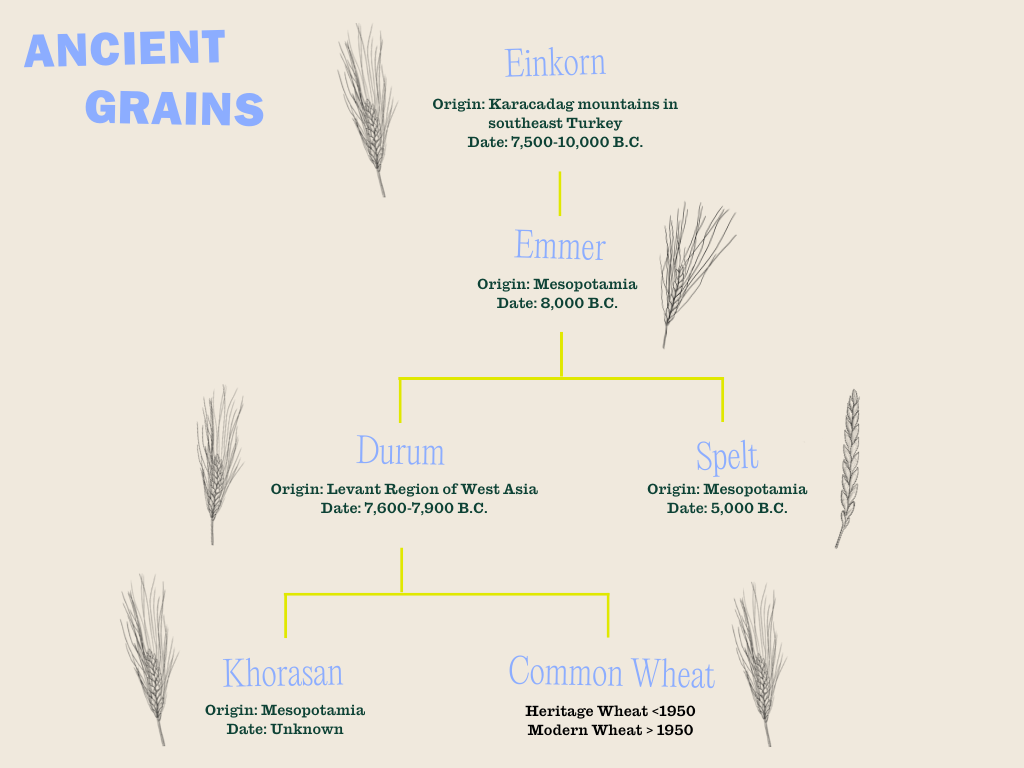 Although there is no official definition of ancient grains, there is general agreement that these grains are ones that have been largely unchanged since their initial domestication at the dawn of agriculture, approximately 10,000 years ago. This category includes einkorn (the Mother of all wheat varietals), spelt, emmer, quinoa, amaranth, millet, and Kamut®.

Heritage grains are ones that have been largely unchanged for the last several hundred years, predating the Green Revolution and the expanded use of hybrid seeds in the 1960’s. These varieties are typically adapted to local growing climates and conditions, thanks to traditional farmer selection and seed preservation practices that are no longer permitted in industrial agriculture. This category includes varieties of wheat such as Red Fife, India Jammu, White Sonora, and Clark’s Cream, or varieties of corn, such as Black Aztec, Hopi Pink, Oaxacan Green.

A wheat kernel has three parts—the bran, the germ, and the endosperm. In the process of making white flour, the bran and germ are removed. However, the bran and germ carry many of the important vitamins and minerals that make grains nutritious—including fiber, protein, antioxidants, vitamin B6, and magnesium. What is left behind after the nutrient stripping is a simple source of carbohydrates, and little else.

Scientists have linked the consumption of foods made from refined grains to a host of chronic diseases, including type 2 diabetes, cancer, and cardiovascular disease. Additionally, a growing portion of the population is being diagnosed with Celiac disease, an immune disorder where one’s small intestine is damaged every time they eat gluten (a set of proteins found in wheat, barley, and rye). Many more have general issues with digesting gluten, identifying as gluten intolerant.

Some of these phenomena can be attributed to the rise in use of ungerminated grain and fast-acting baker’s yeast in mainstream grain products. Ungerminated grains are ones that have not been soaked or sprouted before being processed. Soaking and sprouting releases enzymes from the grain that break down the proteins and carbohydrates in the kernel, making the final product easier to digest. Similarly, the use of fast-acting baker’s yeast replaced the practice of long slow fermentation—the use of a natural levain or a sourdough starter in the breadmaking process. Fermentation helps to break down the carbohydrates in flour—preventing future blood sugar spikes—and it also helps to enrich the natural flavors of the grain and make important nutrients easier for our bodies to absorb.

And of course, ingredients play a critical role. Existing studies on wheat consumption and people with gluten sensitivity suggest that heritage varieties pose fewer problems to our digestive system and overall health compared to modern varieties. Modern wheat varieties have been linked to increased gut inflammation, which causes the feelings of bloating and cramping after eating wheat. Ancient and heritage grains have been linked to suppressed inflammation. In side by side comparisons, people who eat ancient and heritage grain products experience far fewer digestive issues than those who eat modern grain products.

For the majority of the last 10,000 years, bread has been a health food. Before the 19th century, all bread was sourdough bread, and ancient and heritage grains, soaking and sprouting, and long slow fermentation were always a part of the breadmaking process. Modern food science continues to show that breads made in this way have enormous nutritional benefits.

The grains used in most U.S. food products come from only a handful of varieties, and they are usually planted next to each other in giant rows that stretch on for miles. These farming operations are called monocultures—meaning that only one crop is planted throughout the same field. Monocultures are a problem because if a pest, weed, or disease is introduced to the field, it can more readily spread from one plant to the next and end up decimating entire fields. To prevent this from happening, farmers are encouraged to spray chemical herbicides and pesticides on their crops. While this practice kills off pests and weeds, it also leads to chemical-resistant crops and destroys the living organisms in our soils.

The benefit of growing ancient and heritage grains is that many are regionally adapted to thrive in specific climates and soils. This increases crop resilience and decreases the need for farmer reliance on chemical inputs, allowing soil bacteria and other organisms to flourish and build healthy soil. For water-scarce regions like Colorado’s Front Range, grains are a particularly attractive crop to grow because they do not rely on heavy irrigation.

Incorporating them into a crop rotation promotes water conservation and can help prevent soil runoff and erosion. Finally, heritage grains encourage crop diversification, as there are many varieties to choose from that will grow well with each other or in rotation with other regionally adapted crops, like legumes. Increased biodiversity lowers the risk of widespread crop failure and contributes to a healthier soil ecosystem.

Cheap food is attractive to consumers, but a low price does not represent the true cost of what it takes to create a loaf of bread or a box of pasta. We pay for our cheap food after the fact, in rising health care costs and the loss of healthy land and soil. Ancient and heritage grains provide an opportunity for a new kind of food system—one that abundantly gives rather than consistently takes.

In addition to human and environmental health, the grain revival movement emphasizes community empowerment. By supporting ancient and heritage grain production on a local scale, more money stays in local economies. It also promotes a more transparent food system—one based on strong relationships between every player in the grain chain.

Millers, bakers, and chefs know exactly who they are getting their grain from and how it was grown, and farmers know that they will be paid a premium price for a crop that stewards the land. As Paul Newman likes to say, “I just happen to think that in life we need to be a little like farmers. They put back into the soil what they take out.”

Grains in the Front Range

There is a growing movement of farmers, millers, bakers, chefs, brewers, educators, and activists who are working to revive ancient and heritage grains for our health, the environment, and the local economy in Colorado. Ample enthusiasm and consumer demand for natural and organic products in the Front Range have primed the region for a revolution in grain, and in recent years a number of local organizations have been increasingly active in this work. Some of these groups include The Colorado Grain Chain, Rocky Mountain Farmers Union, The Grain School at University of Colorado at Colorado Springs, and Mad Agriculture. From growers to consumers, these organizations are bringing together key players throughout the grain chain with events like community harvests, bake sales, farm tours, classes, and public forums—all with the overarching goal of building relationships and cultivating community around grains. At the end of the day, everyone involved has something in common: the belief that diversity in grain agriculture will not only contribute to healthier soil, but also to more delicious and nutritious diets and a thriving community.

Wheat production in Colorado typically follows a wheat-chemical-fallow cycle, a system that kills the life in our soils and ultimately takes from the land. What wheat production really needs is a legume rotation instead of chemicals and fallowing (rotations of bare soil). That’s where beans come into the picture. Beans and legumes are nitrogen-fixers, a type of crop that helps soil bacteria convert atmospheric nitrogen into a form that plants can absorb. Nitrogen fixers reduce or eliminate the need for synthetic fertilizers on the farm. A balanced and diverse crop rotation—a core regenerative agricultural practice—helps to disrupt cycles of disease and pests, while also contributing to soil stability and health by alternating plants with different root lengths and nutrient profiles. Beans are part of a crop rotation that makes sense for the Colorado agroecosystem, just like grains. Growing the two together could do wonders for our soils.

Grains are one of the only crops (along with beans) where the goal is to harvest the seed, rather than the fruit, for consumption. Because of this, industrial seed companies focus on breeding grains for seed size and yield, sacrificing flavor and nutrition in the process. Farmers in the grain revival movement value the latter, so instead of buying their grain seed from large companies, they save and swap the seeds from heritage varieties that have adapted to the local climate and soils over time. This traditional practice, which is not practiced in the industrial agricultural system, helps to preserve biodiversity, farmer independence, flavor, nutrition, and the stories attached to each variety of grain.

Seed Saving in the Front Range